Men of Concord by N.C. Wyeth 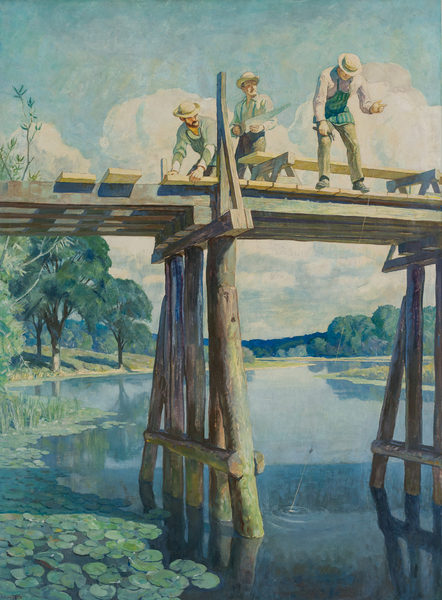 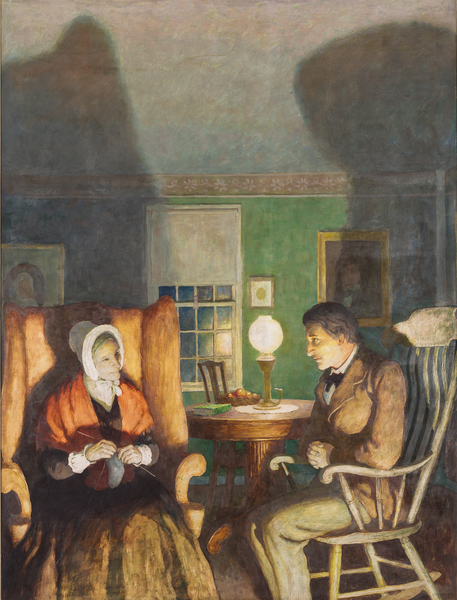 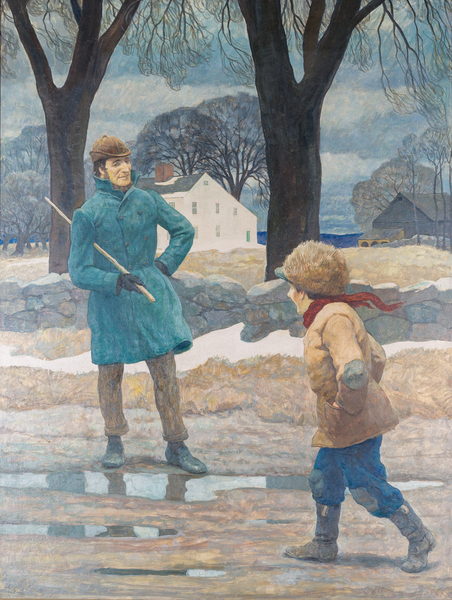 Johnny and his Woodchuck-skin Cap 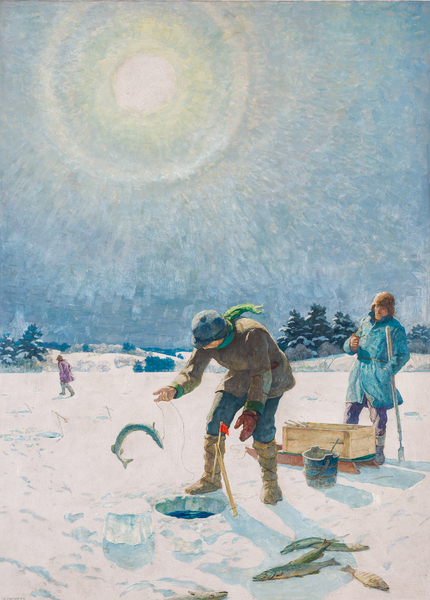 Fishing through the Ice 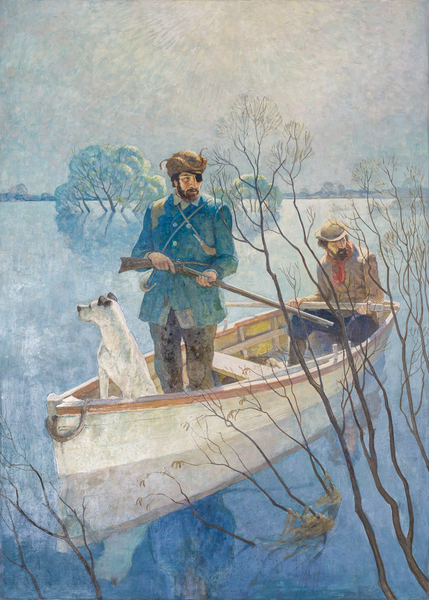 The Muscrat Hunters, Goodwin and Haynes

N.C. Wyeth was one of the most important American illustrators of the 20th century.  His career spanned forty years, over which he enjoyed tremendous critical, popular, and financial success.  Wyeth worked for magazines (Saturday Evening Post, Harper’s, Scribner’s, and Collier’s) and also illustrated books.  He is especially remembered for his illustrations for Scribner’s “Illustrated Classics” series, beginning with Stevenson’s Treasure Island (1911).  He painted murals and panels for public and commercial spaces as well.

Wyeth always had more work offers than he could possibly accept.  Although he sometimes painted entirely in response to his own creative impulses, most of his work was by commission.  The evolution of the Men of Concord series—twelve paintings by Wyeth to accompany selections from Thoreau’s journal published by Houghton Mifflin in 1936—differs from Wyeth’s usual pattern of dealing with his publishers.  Men of Concord was the brainchild of Wyeth himself and held a very personal meaning for him.  It evolved over a period of eighteen years, between 1918 and 1936.

Wyeth was strongly influenced by Thoreau’s life and work.  He grew up in Needham, Massachusetts, not far from Concord, but he didn’t read Thoreau until after he left Needham in 1902 to become a student of Howard Pyle in Wilmington, Delaware.  Wyeth was one of Pyle’s favorite students.  When their relationship cooled in 1906, the younger man needed a mentor.  He relied increasingly on the insight and inspiration he found in Thoreau’s writings.  Wyeth idealized Thoreau.  He described him as the “prophet of the future,” referred to him as a friend, called him “the springboard for every move I can make,” even elevated him to the position of spiritual guide as well as creative inspiration.

Acutely conscious of the materialism of American culture and of the increasing mechanization, commercialization, and subordination of the individual that had intensified since Thoreau’s time, Wyeth was conflicted by awareness of his own success as a commercial illustrator in a market that favored mass-reproducible products, which he felt came at the expense of his integrity.  Thoreau had stressed the importance of the individual over society in his writings and had railed against mechanization and competition.  Moreover, of particular importance to Wyeth, he had tried to live a life consistent with his writings.

Wyeth emulated Thoreau’s stay at Walden in setting up a studio in rural Chadd’s Ford, Pennsylvania, in 1908.  As an artist, he responded to Thoreau’s sense of the familiar landscape as suggestive of broader reality.  Wyeth used the landscape around Chadd’s Ford as inspiration for depicting exotic and faraway places represented in his paintings.  He also looked longingly back to Thoreau’s world and found there a community of thinkers of a kind that he felt  no longer existed in his own time. And he was concerned about the prevailing view of Thoreau as primarily an amateur naturalist.  Wyeth preferred to focus on Thoreau’s metaphorical and poetical use of nature, and also on the author’s human side.  In the end, he emphasized the human side of Thoreau in his Men of Concord paintings.

Wyeth first expressed serious interest in compiling a Thoreau book in 1918.  Houghton Mifflin had contacted him about illustrating a children’s book by Hawthorne, which he declined.  But he took the opportunity to suggest something more in line with his own interests—an illustrated book of selections from Thoreau’s journal.  He envisioned himself as both editor and illustrator.  Because Thoreau did not have much of a popular reputation at the time, Houghton Mifflin was at first lukewarm about the idea.  Nevertheless, Wyeth persuaded the firm to take the project on.

Although eager to get started, Wyeth had other binding commitments.  Work on the book, which he tentatively titled Thoreau’s Seasons, was repeatedly deferred.  But he never lost interest in the project.  He was discouraged in 1927, when Houghton Mifflin brought out Odell Shepard’s The Heart of Thoreau’s Journals—a selection aimed at a broad audience.  But with great foresight, the editorial staff at Houghton Mifflin assured him that Thoreau’s popular reputation was only just beginning.  Finally, in 1930, Francis Allen—a Houghton Mifflin editor who had prepared the 1906 edition of Thoreau’s journal with Bradford Torrey—stepped in.  He undertook to make a journal selection that Wyeth could illustrate.

Wyeth may have been disappointed in the reduction of his planned role in the book, but Men of Concord would probably never have come into being had Allen not intervened.  Moreover, Allen sympathized with Wyeth’s desire to portray a human Thoreau, and selected passages that appealed to the artist.  The book was finally published in 1936.  Displaying a real affinity between text and image, the book was well received.  Today, Men of Concord is a collector’s item.