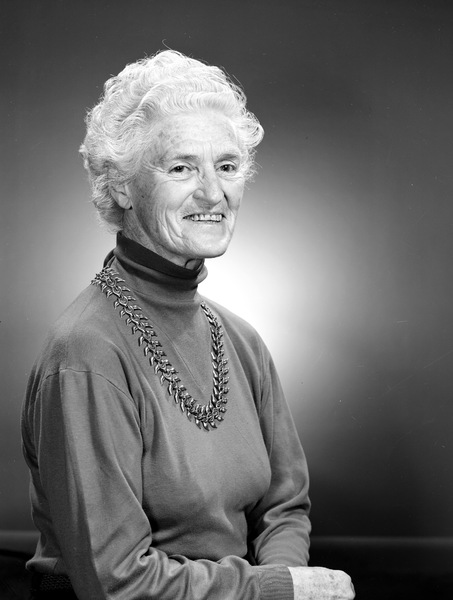 A lifelong Concordian, Mary Ogden Abbott (1894-1981) was an adventurous traveler and an avid horsewoman as well as an accomplished artist in several media. A descendent of Presidents John Adams and John Quincy Adams and the granddaughter of Charles Francis Adams, Miss Abbott was educated at the Westover School in Connecticut and the Museum of Fine Arts School in Boston. She was a president of the Concord Art Association and of the Appalachian Mountain Club.
Mary Ogden Abbott traveled widely with her mother. She explored the western United States, Mexico (where she hunted jaguar), and—of particular importance to her art—the high mountains of Baltistan and Ladakh. The Himalayan landscape and wildlife inspired Ibex (aka Summer Afternoon, High Himalayas), the graceful wood carving in holly,which was shown as part of an exhibition at the Doll & Richards gallery in Boston in 1960, after its donation to the Concord Free Public Library. The piece was originally displayed in the Trustees’ Room, and later in Special Collections. It is now displayed near the Sudbury Road entrance to the Library.
Miss Abbott’s work included a number of major wood carvings—for example, altars for the Grace Episcopal Church in Lawrence, Massachussetts and St. Andrew’s Church in Nogales, Arizona, and teak doors for the Department of the Interior in Washington, D.C. and the Peabody Museum (now the Peabody Essex Museum) in Salem, Massachusetts.