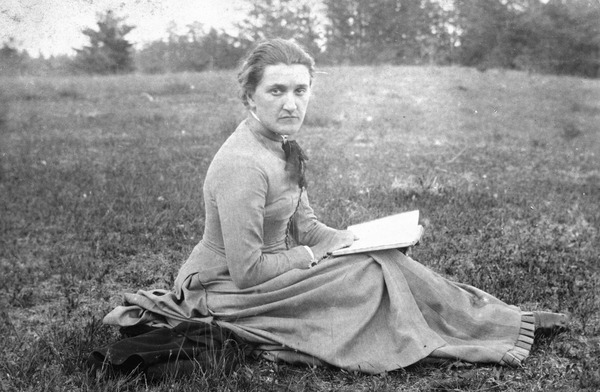 Alicia Mulliken Keyes was born in Concord, MA on June 13, 1855, to John Shepard and Martha Lawrence Prescott Keyes.  Her siblings included Annie Shepard, Florence, and Prescott Keyes.  Her father, John Shepard Keyes, was a lawyer and prominent Republican who served as U.S. Marshal for Massachusetts from 1860 to 1867. When the Keyes family lived in Boston in the winter of 1862 during that tenure, Alicia lived with the Emersons, under the particular care of Ellen Emerson. Following the Civil War, the Keyes family lived in the Bullet Hole House on Monument Street in Concord. After attending boarding school in Belmont, Alicia returned to Concord and studied art with Mary Colman Wheeler and May Alcott.  In 1884, she left for Europe with her companion, Alice Curtis, where she studied art in the Netherlands, Belgium, the UK, France, and Italy.  After three years abroad, she returned to Concord.  She worked as an art instructor at Wellesley College and as a lecturer at the Museum of Fine Arts in Boston.  She made many friends across the arts including Isabella Stewart Gardner and John Singer Sargent.  She was also on the initial board of the Concord Art Association in 1922, which was founded by Elizabeth Wentworth Roberts and led by Daniel Chester French.  She died in Concord on June 1, 1924, and is buried at Sleepy Hollow Cemetery.