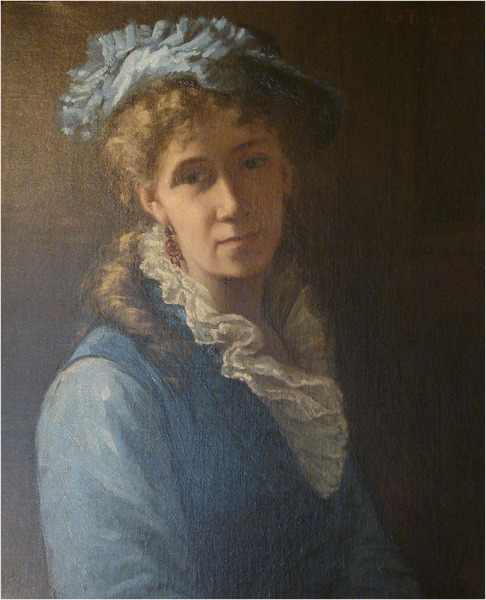 Abigail May Alcott, the youngest of the Alcott daughters, was born in Concord, Massachusetts on July 26, 1840.

May had also long exhibited a talent for drawing, painting, and artistic experimentation.  She  formally studied art in Boston, where her teachers were the highly influential Dr. William Rimmer and William Morris Hunt.  She wanted to go to Europe to study, and it was Louisa’s 1868 success with Little Women  that provided the opportunity for her to take three trips abroad to study art in London, Paris, and Rome.  Upon her return to Concord, she gave art lessons to local children and teens, including a very young Daniel Chester French.

In 1877, the Paris Salon accepted her Fruit and Bottle Still Life. This still life was the only painting accepted that year from an American woman, eclipsing Mary Cassatt.  That same year, May was chosen to exhibit her evocative Owl Still Life, an homage to sister Louisa, at the London Ladies Exhibition. She also wrote a book, Studying Art Abroad, and How to do it Cheaply, which detailed travelling to and living in Europe as a single woman.

In 1878, May married a young Swiss businessman and musician, Ernest Nieriker.  The couple settled in the Parisian suburb of Meudon.  In November of 1879, May gave birth to a daughter she named Louisa May (nicknamed "Lulu"), in honor of her sister.

Tragically, May died seven weeks after the baby was born, leaving her family utterly distraught.  May had earlier stipulated that in the event of her death after childbirth, she desired Lulu to be raised by her sister Louisa in Concord.