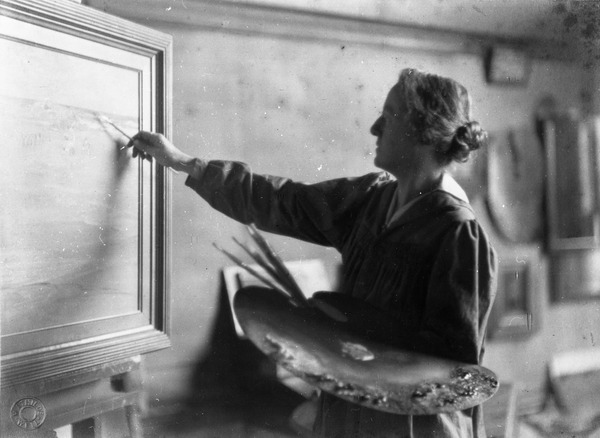 Elizabeth Wentworth Roberts was born in Philadelphia on June 10, 1871.  She was the daughter of Sarah Cazenova Roberts and George Theodore Roberts.  Her grandfather, Algernon Sydney Roberts made a fortune in coal and then helped found the Pennsylvania Railroad Corporation.  Elsie, as she was known, wanted to become a painter, and began studying in New York in 1888 with Henry R. Poore.  She won the Smith Prize from the Pennsylvania Academy of the Fine Arts.  She spent nine years studying and painting in France and Italy beginning in 1889.  When her mother died in 1900, she inherited property in Hopkinton, New Hampshire, and it was there that she met Grace Keyes, her life-long companion.  The two settled in Concord, and in 1908, Roberts purchased the home at 81 Estabrook Road, where they would live for the rest of her life.  Roberts grew more connected to Concord, creating a group of twelve paintings entitled "The Emerson Country," raising money for an ambulance in WWI through paintings of Concord Women, and memorializing Civil War veterans in her mammoth "Memories of Antietam," which hangs in the Town House.  She also started the Concord Art Association, which will celebrate its centennial in 2022.  Roberts committed suicide in 1927, following long bouts of depression over her lifetime.