History of the Art Collection at the Concord Free Public Library 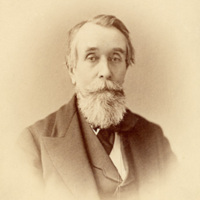 In 1873, the Concord Free Public Library opened its doors.  The CFPL was the first dedicated library building in town, although the town had a circulating library in function since 1672.

William Munroe (1806-1877) began to think seriously about building a new public library for the town. Having already provided in his will for the existing Concord Town Library (Concord's first public library), he shifted his focus to improving the town's library facilities during his lifetime.

Munroe undertook the establishment of the Concord Free Public Library with single-minded determination, surmounting obstacle after obstacle. He purchased private property, moved buildings, widened Main Street, negotiated and made arrangements with the Town of Concord, Middlesex County, and the Commonwealth, encouraged the generosity of others, oversaw the move of the Town Library collection into the new building, and, in the last months of his life, planned the eventual expansion of the new facility.

The Library immediately began taking in pieces of art along with manuscripts, ephemera, and books. 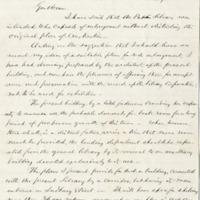 William Munroe always intended for the CFPL to house works of art.  According to local historian Allen French, "pictures, coins, and medals ware also given, for from the first, it was intended that the building should house an art collection."  In early library reports, works of art were named along with their donors.

While it may seem somewhat unusual to conceptualize a public library with an art collection on the scale of the CFPL, at the time of its founding in 1873, the Museum of Fine Arts in Boston had only been in existence for three years and was still three years from opening its doors to the public.  The Concord Antiquarian Society, which would in turn become the Concord Museum, was not founded until 1886.

Often, a library was the first institution established in a town for the cultural benefit of its citizens.  Seen in that light, housing art and artifacts makes sense for the library as the centerpiece of town life. 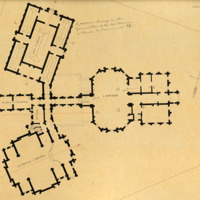 By 1875, Munroe was steaming ahead with his idea for expanding the library to make sure that it had room for continuous growth in both the book collection as well as the works of art.  These plans, drawn up by original Library architects Snell and Gregerson, showcase an expanded library with additional room for the circulating collection as well as a connected art museum.  While these plans never achieved fruition, the seeds of a well loved and unique art collection were sown.